Janet Schroeder, MFA, PhD, is a percussive dance artist, scholar, and teacher, with a particular interest in tap dance, Appalachian clogging, and body percussion. She maintains her physical practice of these rhythmic dance forms throughout the U.S. and Mexico, creating and presenting choreography as well as taking and teaching classes. Schroeder’s explorations of rhythm in dance have recently taken her to Mexico, Appalachia, Chicago, New York City, the Berkshires, Greece, and France. 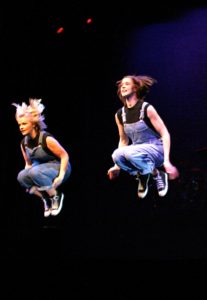 Schroeder is currently Lecturer in Dance at the College at Brockport, SUNY where she teaches modern dance for majors, dance composition, dance history, dance pedagogy, and graduate level dance research and history. She recently served as Visiting Assistant Professor of Dance at University of North Carolina, Charlotte.

Schroeder recently completed a PhD in Dance Studies at The Ohio State University where she was awarded a Presidential Fellowship, an honor that recognizes outstanding scholarship and research ability, which provided Schroeder the opportunity to devote full time to her dissertation research during the final year of her program. Schroeder’s dissertation project is a comparative analysis of tap dance and Appalachian step dance, which specifically foregrounds the cultural values of “innovation” and “ongoingness” in presentations of the forms on the concert dance stage from the late 1970s to the present. Additionally, her analysis addresses these dance forms as ethno-racial projects and examines their roles in cultural representation to explore the stage as a site of ethnic and racial formation where different iterations of Americanness are on display.

Schroeder has given public lectures at Jacob’s Pillow Dance Festival as scholar in residence, and she has shared her research at conferences including those sponsored by Dance Studies Association, Congress on Research in Dance, Society of Dance History Scholars, World Dance Alliance, and National Popular Culture Association/American Popular Culture Association. In 2015, Schroeder was awarded first place in the Arts area at the Hayes Graduate Research Forum at OSU for her presentation “Tap Dance, Notation, and The Archive: The Possibilities are Plural.”

In addition to written scholarship, Schroeder has an active performance and choreographic practice. She is currently assistant artistic director of the Columbus, OH based tap dance company, Movement Afoot, with whom she also performs. As a freelance Appalachian step dancer, Schroeder has appeared at venues in Rochester, NY and Columbus, OH, as well as, very briefly, on the Great Wall of China. Schroeder is an in-demand choreographer for tap dance and body percussion pieces and has created works for professional companies and college students. These choreographies have appeared on stages in Brazil, Mexico, and China, in Rochester, NY, and at University of Georgia and Ohio Northern University.

As an educator, Schroeder enjoys engaging with students in the studio as well as in seminars, working always to translate the social and communal values of percussive dance practices into the classroom. Schroeder has taught semester-long courses including Dance in the Global Context, Dance in Popular Culture, and Introduction to Dance, as well as studio-based courses in tap dance and contemporary dance technique. These engagements took place at OSU, The College at Brockport (SUNY), and University of Dayton. As a guest artist, Schroeder has shared workshops in body percussion, tap dance history and aesthetics, and composition at University of Maryland, College Park, Universidad de Las Américas, Puebla, Hathaway Brown School, Cranbrook Educational Community, and the Kristi Faulkner Dance Intensive.

Additionally, Schroder is interested in engaging communities and audiences outside of academic institutions, and has enjoyed experiences as an advisor on an exhibit about dance at the Children’s Museum of Indianapolis, sharing body percussion with the group “In Motion,” an organization dedicated to bringing movement classes to adults over age 50, and teaching the basics of Appalachian flatfooting at small folk music festivals.

From 2005-2010 Schroeder toured with music and dance company Rhythm in Shoes, and she continues to engage in percussive dance residencies in communities and universities across the country. She holds a BFA in musical theatre from Ohio Northern University and an MFA in dance from The College at Brockport, SUNY.

COMMUNITY ENGAGEMENT AND OTHER TEACHING EXPERIENCE

“Shuffling with my dancestors: Embodying and transmitting cultural memory through tap dance,” Forthcoming.
Collection on popular dance and cultural memory, edited by Clare Parfitt and published by Palgrave in 2019.

“And Still You Must Swing: Tap Dance and the ‘Swing Aesthetic’ as Affirmations of Black Joy,” 2/2018
Collegium of African Diaspora Dance (CADD), Durham, North Carolina

“Suiting Up: It’s Bigger than the Body in Corporate Culture,” 4/2013
Dance Under Construction/Congress on Research in Dance: Special Topics, University of California, Los Angeles, California

“Laughter from the Lawn: Demystifying Humor and Laughter in Dance,” 4/2011
Scholar’s Day, The College at Brockport, Brockport, New York